Eating, drinking, eating, drinking...taking about eating and drinking!  Food is social, entertaining and sustaining.  If you love it as much as I do, then check out my foodie blog: 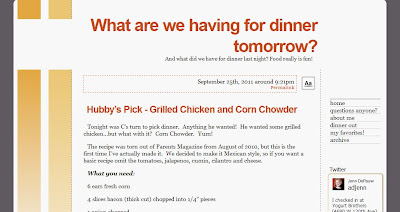 Posted by adjenn at 4:32 PM No comments:

Where were you and what were you doing on September 10, 2001?  If someone asked me that question right now, I would have to say that I don't remember.  But ask me about September 11, 2001 and it's a whole different story.  It's still etched in my mind - like millions of other people.

C and I had just moved to Seattle.  To me that's probably the most ironic part of my memories.  Here I was watching the events of 9/11 unfold, and I was what felt like a world away from a place I loved.  The day started off so strange - C's alarm went off...but instead of the regular beeping sound, the radio went on.  As I was slowly waking the words were entering my consciousness, but it was like I was listening to the plot of an action film.  I didn't realize that what I was hearing was real; that it was really happening.  Suddenly, we realized something was happening and turned on the TV.  Within a few moments, the second plane hit the South Tower - Oh God No!  What is happening?

I remember my heart racing.  I also remember getting the chills and shivering.  It was confusing, scary and seemed so unreal.  We sat there in bed, eyes glued...I was praying for the people in those towers...praying for the people on those planes.  At one point I was wishing I was still sleeping.  As the events of the day continued - the Pentagon, the collapse of the first tower...when is it going to stop...Flight 93, the collapse of the second tower...what are we going to do?  The thoughts going through my head wouldn't stop.  The tears kept falling...crying for people I didn't know; and praying for everyone I did.

The feeling of helplessness was overwhelming.  I kept thinking about what I would have done if I had been in my hometown in NJ.  How could I help?  What could I do?  My little sister went and helped.  She fed workers at Ground Zero - to this day I don't think she knows how proud I am of her for doing that.

What a day of tragedy, sadness and loss.

I went back home to visit my family in November of that year.  My mom, sisters and I went to Ground Zero.  The feeling to go there was overwhelming...I needed to see it for myself.  It was a place I had been to so many times and just needed to go there again.  And so we did...and I once again prayed.

It's hard to believe that ten years have gone by since the events of that day.  For the families that lost loved ones - their lives changed in an instant.  I could never try to imagine what they go through; to them I wish peace.  As an American, I think we all changed a little that day - we lost our innocence, our safety and security was challenged; the big picture view would never be the same.

Ten years later and I have a four-year old son.  His little mind knows nothing about September 11th, he will never see the New York City skyline complete with the Twin Towers and he will only know life post 9/11/01.  Someday, he will learn about the events of the day - probably first from C and I, then in school...he will see the images and will hear the stories.  He will hear about how the world has changed since that day...and one day I hope to take him there - and together we will pray.


I pledge allegiance to the flag of the United States of America,
and to the republic for which it stands,
one nation under God,
indivisible, with liberty and justice for all.

May God bless America.  We will never forget.

And I'm not sure where to find it.

The last few months have been - well, for lack of a better word, trying! I'm generally not good with change (anyone who knows me can vouch for that). So needless to say with all the changes that have come down in the last nine months, it's a wonder I've not lost my mind (figuratively speaking of course).

In the last two weeks though, I have realized that the biggest casualty of it all has been my style. The worst part is that I'm not really sure what to do about it.

So where to begin.

Nice clothes are a passion of mine. I have an obsession with designer clothes, name brands and amazing materials. But, I like mine understated - it's not super important to have those tags, brands and names outward facing. It's a personal thing I guess, but knowing I'm wearing an amazing piece of clothing gives me a certain level of confidence.

I like loose fitting clothes; kinda that Eileen Fisher look. And, I love black. Much to the chagrin of some of my girlfriends, there will never be enough black in my wardrobe. So, with all that said, how is it that I've now all of a sudden lost my style?

Let's start at the top...money is an object. Shopping is a luxury that frankly is not finding it's way into our budget right now. Also, my body is working against me these days. I'm just not happy with how it looks and definitely not happy with how the clothes in my closet fit. The last part of the equation is the one that's giving me the most trouble...I'm exhausted. Too exhausted to get dressed? Yeah, maybe. But mostly, it might just be the effort. To much effort to get dressed?  Yes, and that's a whole post in and of itself.

So, lost is where I'm at!  I'm in a rut of uninspired outfits.  I'm even struggling with shoes.  Best of intentions have me picking cute shoes; I put them on, admire and then promptly take them off, put them away and grab the most comfortable pair of shoes that are at arms length.  Argh.

I need to come up with a plan.  Not sure what the plan is going to be...but it will be one small step at a time.  One chance each day to get it a little better than the day before.  And hopefully, just maybe, the start of Fall will give me a boost of inspiration.  Til then...